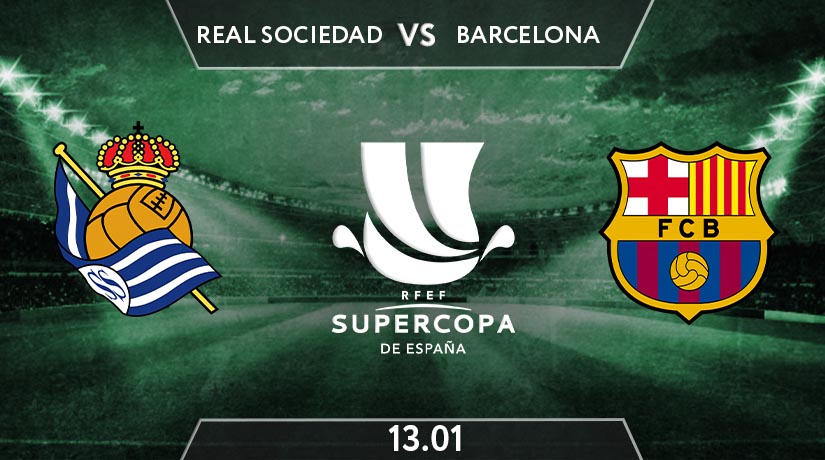 The Supercopa de Espana semifinal is on schedule this midweek. The first one is the Copa del Rey finalist, Real Sociedad is taking on Barcelona. The former has been in a negative trend with only one win in twelve games while the latter is on the opposite. The Catalan side has been unbeaten in the last eight matches with six victories so far. It will be a tough call for Mikel Oyarzabal and Co to defeat the in-form Blaugrana although there is still a chance to stumble them. The match will take place in Nuevo Archangel, Cordoba.

Sociedad was involved in a thriller while travelling to Sevilla last weekend. Yet, they failed to snatch points there as they were beaten by the host 2-3. Sevilla’s forward Youssef En-Neysri scored a hattrick while they could only reply twice by Diego Carlos’ own goal and Alexander Isak’s goal.

On the other hand, Barcelona’s positive trend endures as they trashed Granada 4-0 on the road. Antoine Griezmann and Lionel Messi shared the goals as they netted brace each. Such result leads them closer to the title race with only three points and four points away from Real Madrid and Atletico Madrid.

Imanol Alguacil has been in favour of 4-3-3 formation with the transition to 4-2-3-1 or 4-1-4-1. The frontmen role will be occupied by William Jose, Portu and Mikel Oyarzabal. Unfortunately, David Silva is sidelined due to his injury along with Luca Sangali, Aihen Munoz, Aritz Elustondo and the veteran goalie Miguel Moya.

Meanwhile, Ronald Koeman would still be deploying his best 4-3-3 with Messi-Griezmann and Dembele upfront. The formation could transform into 4-1-2-1-2 when Messi drops off while two Frenchmen could operate in the middle as well as out wide to give the Argentine talisman some space to score. In their injury table, there are Gerard Pique, Sergi Roberto, Ansu Fati and Phillipe Coutinho who are still unavailable for this fixture.

The two wingers, Portu and Ozaryabal could be the key in their attacking line. Both have scored twelve goals and seven assists combined. Another key man to watch is Mikel Merino, the anchorman in the midfield.

Lionel Messi is still irreplaceable this season, with fourteen goals and four assists in all competition. His contribution is still dominant in Koeman’s system. Another notable name to focus on is the Dutchman Frankie de Jong, who has been given more advanced and attacking role lately.

Imanol Alguacil’s men need to contain Messi and Frankie de Jong if they aim for a win here. Barcelona’s defense is still complacent and their defenders are lack of speed to close down the quick counter attack. Unfortunately, such will not be easy, especially if Pedri and Miralem Pjanic manage to take control of the game. The Catalan’s side is still in favour of a narrow win, just like their last encounter in La Liga.

Ronald Koeman’s men are still the favourite here. They are projected to win at 5/7, whereas Sociedad’s odds to win are quite lower at 19/5. The odds for the draw result are at the value of 17/5.