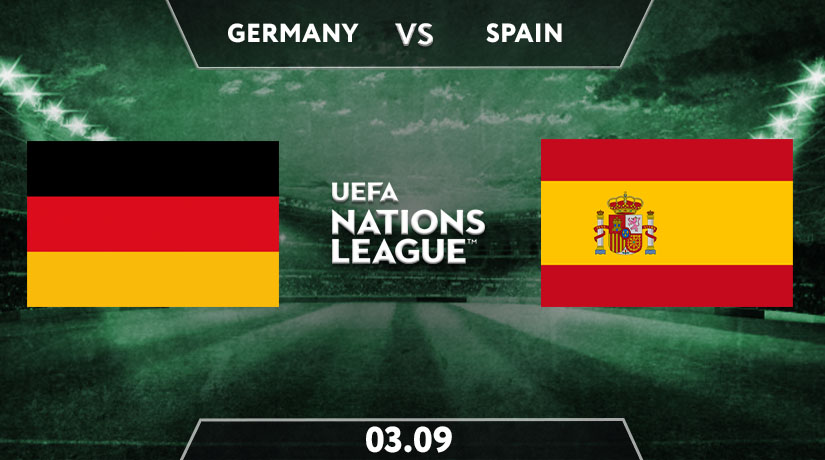 Germany vs Spain Preview and Prediction

The next edition of UEFA Nations League is on schedule this week. On the top tier in Group 4, Der Panzer will be tested by La Furia Roja in their first game next Thursday, which will be held in Stuttgart. Both sides will definitely try to avoid a defeat and attempt to secure a win for a good start this season. It will certainly not an easy task for the home side or Luis Enrique’s men.

Germany has named their current squad without a number of key players, especially from Bayern and RB Leipzig, which managed to progress to the last four in the Champions League last month. Joachim Loew does not call up Manuel Neuer, Leon Goreztka, Joshua Kimmich, Serge Gnarby from Die Roeten and the duo defenders in Leipzig, Marcel Halstenberg and Lukas Klostermann. The former VFB Stuttgart boss when the club reached Winners Cup final in 1998 also does not include Marc-ter Stegen in the team due to his knee injury. Thus, he picked two debutantes, the Hoffenheim goalie, Oliver Baumann to be the deputy of either Kevin Trapp or Bernd Leno between the sticks, the versatile Atlanta winger, Robin Gosens and Florian Neuhaus from Gladbach.

Spain is seemingly in the same circumstance. Yet, such is mainly because of Luis Enrique’s own initiative. The former AS Roma and Barcelona boss selected a number of new faces for the current squad, which include the youngsters Ansu Fati, Ferran Torres, Eric Garcia, Mikel Merino, the Wolves sensation Adama Traore, Oscar Rodriguez, Sevilla’s left back Sergio Reguilon plus Bilbao’s top goalie Unai Simon. He also chooses to exclude the experienced names such as Isco, Alvaro Morata and Saul Niguez in order to see the depth of Spanish player pool at the moment.

Joachim Loew is a fan of offensive football with flexible formation. He often opts for 4-3-3, which can transform into 3-4-3, 3-4-2-1 or 4-2-3-1. Considering the opponent’s quality, Frankfurt’s goalkeeper, Kevin Trapp, might earn his spot in the starting IX while on the attacking side, Bayern’s new signing Leroy Sane, Timo Werner and possibly Kai Havertz are likely to be the three blades upfront.

His counterpart, Luis Enrique normally relies on the similar main formation, 4-3-3. Marco Asencio, who marks his return after his long injury last summer, is likely to be the first attacking option alongside Adama Traore and possibly Real Sociedad forward Mikel Ozaryabal. In the midfield, Thiago might be given a role to anchor this area with Rodrigo and Fabian Ruiz.

Chelsea’s current top signing, Timo Werner will be the center of the spotlight. He is expected to score more goals in the international fixtures. The former Leipzig man has bagged eleven goals so far in 29 caps. Another notable key man to watch is the 21-year-old versatile Kai Havertz.

In Spain, Adama Traore and Marco Asencio are likely to be the perfect combination upfront and will be the menace in German defence with their impressive pace and creativity. Another possible key figure in Spain is Napoli man Fabian Ruiz, who excels at building up the attack and making long shots.

As both will not be in their full potentials, they will be playing with fewer burdens and attempting to show the new face of their team. In fact, they both are likely to be involved in a tight clash in the midfield and creating decent chances to score goals. Yet, the game potentially could end in a draw, considering the equal squad qualities.