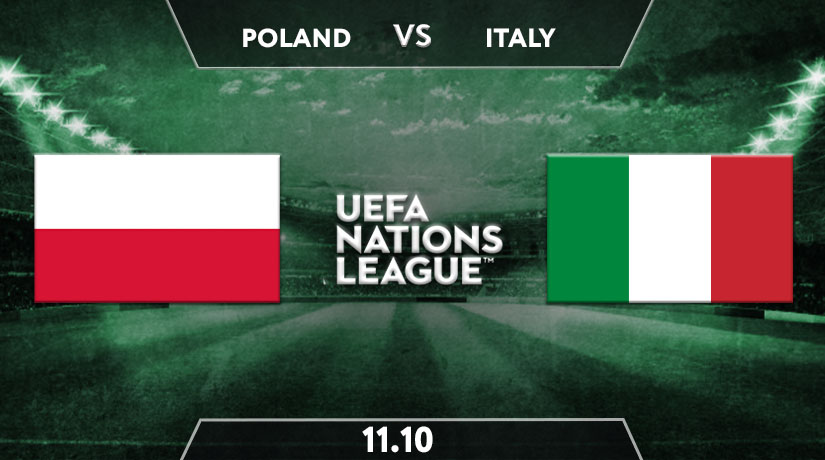 Gli Azzurri is in progress of rebuilding the team. Under the command of Roberto Mancini, their form has been positive.In their last two games in this year’s edition of UEFA Nations League, they are still unbeaten with one draw and one win. This weekend, they will be taking on Poland, one of their intriguing contender, in Gdansk.

Poland snatched a 2-1 win over Bosnia in the previous match of Nations League. Kamil Glik and Kamil Grosicki scored their winning goal while Bosnia only replied once through Hajradinovic. Then last wednesday, they dismantled Finland 5-1 on a friendly match.

Italy clinched an important win in their visit to Amsterdam on matchday 2 of UEFA Nations League. They thumped Netherlands 1-0. Nicola Barella bagged the only goal of the game at the end of the first half. Meanwhile, in the friendly match this midweek, they trashed Moldova 6-0.

Jerzy Brzeczek tends to employ 4-2-3-1 formation with the transition to 4-5-1. Robert Lewandowski will be leading their attack, while Grzegorz Kryzchowiak, Kamil Grosicki, Mateusz Klich, Damian Kadzor and Karol Linetty will be supporting him in the midfield.

His counterpart, Roberto Mancini, has always been deploying 4-3-3 formation. The former Manchester City boss counts on Ciro Immobile, Federico Chiesa and Stephan El Sharawy or Domenico Berardi as the frontmen trio. In the midfield, Nico Barella, Jorginho and Lorenzo Pellegrini will be the ones who keep the balance of their offence and the defence.

The captain Robert Lewandowski is definitely still the key figure of Poland. He has registered 61 goals in 112 appearances. Another notable name to watch in this fixture is the former Monaco centre back Kamil Glik.

The most coveted youngster in Serie A, Federico Chiesa,who finally decided to move to Juventus on the last minute, is one of the most versatile figure in the squad. He has only notched one goal in his 19 caps so far but is expected to have more appearrances soon. Some other key men to watch here are Stefano Sensi, Nico Barella and PSG wing back, Alessandro Florenzi.

Roberto Mancini’s men are likely to be involved in another tight clash. However, they still have better chance to pick up three points here despite the fact that Lewandowski and Co have the advantage playing at home. Gli Azzurri’s defence has been solid yet their forwards need to improve their finish so that they will not waste a number of decent chances. Overall, a one-goal win is still fairly plausible.

The home side is only projected to win at 4.15, which is much lower than Leonardo Bonucci and Co’s odds to win, which are at 1.97. The draw result is at the value of 3.45.