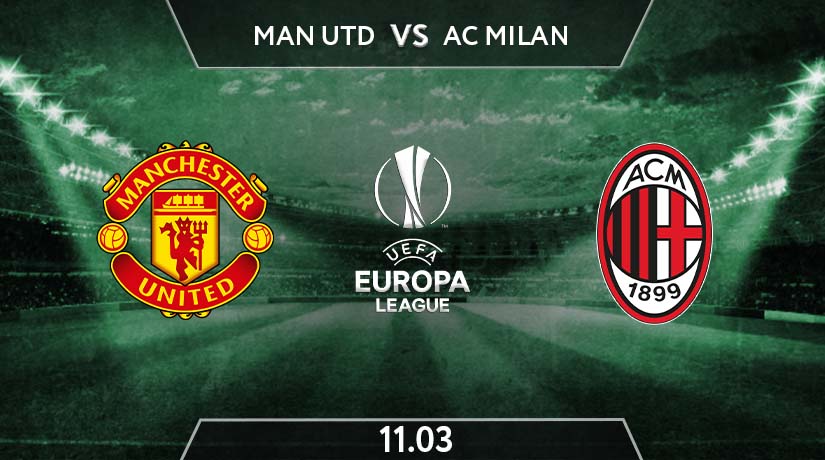 The clash of two former Champions League winners, Manchester United and AC Milan takes place in Europa League round of 16 this midweek. Two teams which are both associated with red devils will be squaring off in Old Trafford at the first leg. Both are sitting on the second in the domestic league and eyeing for the European glory this season.

Manchester United surprisingly ended The Citizens’ unbeaten run in 28 games last weekend by dismantling Pep Guardiola’s men 2-0. Bruno Fernandes opened the scoring through a penalty and Luke Shaw doubled their lead at the second half.

AC Milan thumped Verona 2-0 too last weekend. Radu Krunic and the Manchester United loanee, Diogo Dalot scored their winning goal to keep them on the second to entail Inter Milan.

Ole Solskjaer is likely to employ 4-4-1-1 again as a number of key men in their squad are ruled out, including Edison Cavani, Marcos Rashford, Paul Pogba, Danny Van de Beek, Juan Mata and David de Gea. Therefore, Anthony Martial will be featuring as the frontman supported Bruno Fernandes as the number 10 player. On both flanks, Daniel James and Alex Telles are operating as both winger and wide defensive midfielder while Fred and Scott McTominay are playing in the middle.

Meanwhile, Stefano Pioli will still be in favour of 4-2-3-1. Unfortunately, plenty of his vital figures are sidelined such as Theo Hernandez, Hakan Calhanoglu, Ante Rebic, Mario Madzukic and Zlatan Ibrahimovic. The only option left for Pioli now is playing Rafael Leao as the targetman. Behind the Portuguese youngster, Rade Krunic shall get the nod again here, supported by Jens Petter Hauge and Samuel Castillejo or Alexis Saelemaekers on the wings.

The former Sporting Lisbon man, Bruno Fernandes is the current top scorer of the club with 16 goals and ten assists in Premier League only. Another notable name to watch here is the skipper Harry Macguire.

In Milan, the current forward crisis shall give the chance for their youngsters to take up the position as the main scorer. Rafael Leao is one the expected figures who has contributed 5 goals and assists each. Another key man to watch here is Frank Kessie, the second top scorer of the squad.

The clash is bound to be tight. The home side may be less solid at the backline but Bruno Fernandes and Co could potentially win the match if they could optimise their attacking midfielder’s creativity and employ the counter attack. Stefano Pioli’s men, on the other hand, are expected to be careful while defending and more clinical in their finish, especially Rafael Leao, Jens Petter Hauge and Samuel Castillejo. Nevertheless, United seems to be more likely to secure a home win here.

According to the punters, Ole Solskjaer’s men are backed to win at 9/13, whereas Rossonerri are projected to win at 19/4. The odds for a draw result are at the value of 31/10.