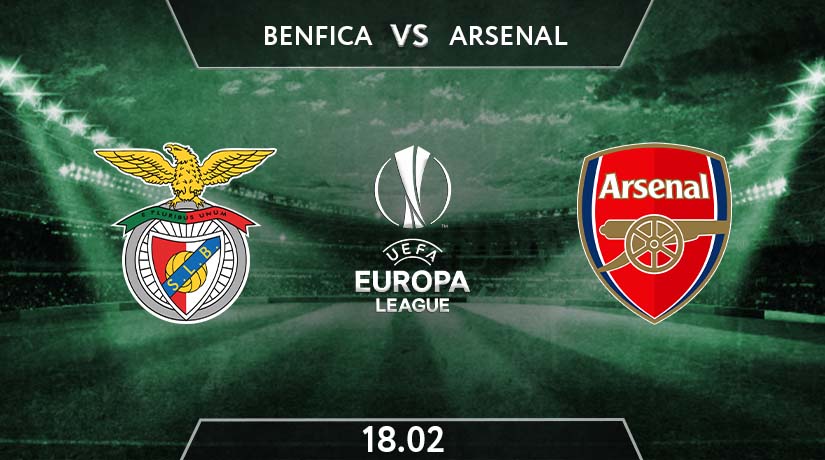 Following the drama of the Champions League action on Tuesday and Wednesday, we shift focus to UEFA’s other European club competition, Thursday’s Europa League. It’s a busy night of play with several teams from the United Kingdom in action. Arsenal travel to Benfica for a game you can follow live on TV from 20:00 GMT.

Benfica head into this Round of 32 first leg match against Arsenal with the home advantage after finishing runners up in Group D. Despite heading into the competition as favourites to win the group and one of the early picks to win the trophy, Benfica ended two points behind Glasgow Rangers. Stats of three wins and three draws were bettered by Steven Gerrard’s men.

The Portuguese Primeira Liga side sits fourth in their domestic league behind Sporting Lisbon, Porto, and Sporting Braga. They are 11 points off the leaders but need to find four points to catch Porto in second and force qualification to next season’s Champions League. That will dominate the team’s thinking in the coming weeks.

Arsenal would’ve been disappointed to be involved in the Europa League this season, missing out on the riches of the Champions League. Interestingly, this tournament takes on a new meaning for the Gunners as winning the title is now their best chance of making into Europe’s elite next term. A top-four finish in the Premier League is dead and buried.

We should see Mikel Arteta’s men give their Europa League games a bit more attention as they’ll want to battle into the later rounds and have a good shot at winning it. They did win Group B with 18 points collected thanks to a perfect six wins. The Gunners didn’t put a foot wrong, scoring 20 goals, conceding only five and enjoying an eight-point cushion over the chasing pack.

Benfica are a dangerous side on their patch, and they took the lead early against Rangers in the groups. The Gers were able to battle back for a draw in Portugal and Arsenal would, perhaps, see a scoring draw as a decent result on the draw.

Benfica have been priced at odds of 2.79 to win with Arsenal available at 2.416 with 22bet. Fancy the draw? The level finish is 3.56 and that would set-up a shoot-out at the Emirates.